Now that THE CIGAR MAKER is complete and I’ve moved into the publishing stage, I am desperately trying to avoid typos and spelling/grammaitcal errors. With a 145,000 word book this is quite a challenge, and frankly too much for one man to handle on his own. I’ve been fortunate to have a couple folks do a pass for spelling but as I sit down to format the pages and review excerpts I’m noticing more and more little ones that were missed.

What I need is for someone to go through the entire manuscript and find as many typos as you can (hopefully there aren’t many left)…If you are interested please email me at mmcginty_32@yahoo.com with a brief blurb on your history as a writer, editor or proofreader, as well as your requirements. I am looking for a fairly quick turnaround – within 30-45 days from the time I send you the manuscript (we can work around the holidays).

For a brief sample of what this book is about you can read an excerpt here.

If you are interested, I will send you a couple pages to proofread, to get an idea of your style and your attention to detail. I am on a limited budget so you must be willing to work cheap!! Of course, your name will be mentioned in the acknowledgements section of the book…

All you Christmas shoppers out there looking for deals can do a lot worse than ELVIS AND THE BLUE MOON CONSPIRACY….The real story of NASA’s first moon landing. Since this book was published 6 years ago I’ve had the pleasure of hearing people say things like, “this wasn’t the type of book I would normally read, but once I read it I really liked it,” or “I had to keep reading because I HAD to know how this was going to end!”

It’s a perfect gift for the book lover/space buff/Elvis fan/conspiracy theorist in your life. And it’s very affordable! Head on over and pick up your copy today….Drop me a note and I’ll sign and personalize it for you or your special someone….you can read more about ELVIS AND THE BLUE MOON CONSPIRACY right here.

Salvador finished his rum and realized he’d had more to drink in the last three days than in the entire last year. He didn’t want to think anymore, he just wanted to have his way and be gone. “I’ll pay you back,” said Salvador as he took the money and headed for the stairs while Juan Carlos grinned and the men returned to their game.

It was not Salvador’s first visit to a brothel. He had gone to a few when he was with El Matón, before Olympia and Josefina came into his care. Salvador’s opinion of these girls was that they were of the lowest class; unfortunate to the point of emptiness, yet sassy and savvy with the dollar. Efficient and biased in their ways, as if they had experienced every man in the city and had settled, for that one moment, on you. They were soulless and worthless and yet he needed them badly.

Salvador was greeted at the top of the stairs by the madam, a boisterous Cuban woman of roughly fifty with a low neckline that thrust her bust upward for men to judge. He handed her five dollars, and she pointed to a hallway with four closed doors that looked very much like the inside of an apartment building. “Melina is free,” she said. “Number two.”

Salvador pushed the door open and saw a young girl sitting on the bed wearing a black negligee about to strike a long wooden match and light the cigarette that dangled from her lips. Salvador immediately thought there must be some mistake, that this girl was too young. She couldn’t be any older than Lázaro.

Melina froze with her match in hand and raised an eyebrow. Even more youthful was her voice. “Gonna be hard to see me from all the way over there. Why don’t you come in?”

Salvador closed the door behind him. “How old are you?”

“Seventeen,” she struck her match and lit her cigarette. “So what?”

“Sixteen. Is that better? Or would you like I say fifteen?”

Sassy indeed. He said, “Either way you’re younger than my daughter.”

“Whatever turns you on, pal,” Melina said as she laid back, her cigarette still burning in hand. She noticed his black eye but said nothing. Salvador unzipped his pants.

He thought he would struggle with the girl’s youth but the shame of the act made it more appealing. Melina was charming in her lewdness and Salvador felt unperturbed and become a younger version of himself, Salvador the Bandit, spirited and agile. Her flesh was soft and unblemished by age, and her eyes welcomed him in a way that seemed they had known each other many times before. The alcohol helped him last, and when it was over Salvador dressed and left her alone without giving her a look or a farewell.

Excerpt from Chapter 22…comments are welcome!

Melissa Williams, author of Iggy the Iguana has a great day at Barnes and Noble – check it out here!

Let’s give Sarah Palin a run for her money…

For those of you who have just crawled out from under your cozy little rocks, Sarah Palin’s ghost writer has a book coming out tomorrow (no link available, you know where to find it). It’s already #1 on amazon.com.

Well I’ve got news for Sarah Palin: as of this writing, Elvis and the Blue Moon Conspiracy is right behind her, currently ranked #142,157 – and this indie writer won’t stand for 142,157th place!

So head on over to amazon and pick up a copy of Elvis – only $11.95. Makes a great gift for the Elvis-love/space-fanatic/conspiracy buff in your life. If you love historical distortion, satire, and want a few chuckles and laughs, you can do a lot worse than Elvis…it even won an award! 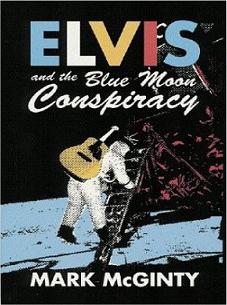 I figure I need to sell about 1.6 million copies of this book in the next week to best Sarah Palin. Considering how I’ve done in the past – I need all the help I can get. Let’s make headlines! Let’s make history!

Check out what the reviewers said!…

Reports of Elvis’ death were greatly exaggerated; this book sets you straight as to what really went on. Will this topic ever stop being funny? Try this light and fun read.

Elvis, the first man to set foot on the moon? You must read this well-crafted book to find out! Mark McGinty’s humorous take on the first moon landing of Apollo 11 takes us through the preparation, the actual space trip, and the never-to-be-forgotten first step on that yellow orb in the sky!…This is a must-read and highly recommended for all you space buffs who love a lot of humor tossed in. Good job, Mr. McGinty! I want to read it again…

A wonderful romp in never-land…The author has peppered his story with enough real facts and detail to make you want to believe it… The reader will enjoy meeting a wide variety of delightfully crazy characters. The story is fun, the characters are complex, and the idea is certainly original. If you’ve ever been intrigued by all those conspiracy theories that are constantly emblazoned on the pages of the supermarket tabloids this will be an interesting read.

An entertaining book which provides a fresh and innovative approach to Elvis’ fictional adventures.

The book is available here.

Art Brut at the Triple Rock

Normally I don’t do concert reviews but this one was just too good. If you don’t know about Art Brut, you should. They’re a kickass post-punk indie rock band out of London. They have this polished hard rock sound with an eccentric vocalist who chants more then he sings, with lovable lyrics that are borderline hilarious. From singing about erectile dysfunction to riding the bus to musing about his teenage love, Emily Kane, frontman Eddie Argos is a commanding though perfectly clumsy lead singer who uses the mic cord as a jump rope, spends about two and a half songs pacing through the crowd and is genuinely one of the nicest musicians I’ve met.

The same can be said about everyone in the band – who were completely accessible and downright humbled whenever they were approached for an autograph, or asked to pose for a picture. A  hardworking, world-touring professional rock band they are but when they were offstage and among their fans they were nothing more than nice people.

First, the shirt that Mrs. Boogle made. You can read the backstory on Eddie’s blog but in honor of guitarist Jasper Future, I wore this Rock the Jasper shirt to the show…which proved to be our “in” with the band.

We were there about an hour before doors opened, to get some food and drink, and were amazed when guitarist Ian Catskilkin and Eddie Argos walked into the bar with a few others. They completely blended into the light crowd at the Minneapolis hipster Triple Rock Social Club and just kind of hung around. I thought I saw bass guitarist Freddy Feedback checking out the pinball machine and jukebox but Jasper was nowhere to be found.

Pretty soon Eddie walked by so I called out to him and showed him my shirt — instant cool. He laughed and came over and said, “That’s ace!” He hung around to chat and actually introduced himself, “I’m Eddie,” he extended his hand. Then he tried to take a picture of my shirt but couldn’t figure out how to use his camera phone. “I’ll get it later,” he said before we started talking about comic books. Here he is with me and Mrs. B.

Cool enough for me.

Eddie told us he’d see us inside (and that Jasper was feeling miserable)…and off he went. So once we were in the actual show we were greeted by more rock star accessibility: Jasper Future and drummer Mikey Breyer were working the T-shirt table. Of course, they both loved my shirt, signed autographs and posed for this picture…Note Breyer’s Griswaldian point (some of you will get that). 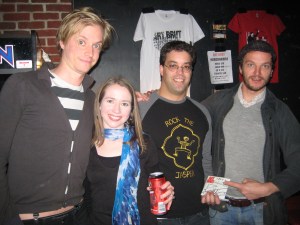 Jasper Future, Mrs. B, Me and Mikey Breyer.

As the crowd arrived the band hung out among their people, chatting and posing for pictures, signing autographs and generally being the cool music dorks that they are.

Eddie Argos standing among his people

Once the show started and the opening act Surfer Blood finished their set Art Brut took the stage. Enthusiasm was already buzzing and since the band’s last gig was in Omaha, they were excited to play in a (cough:cough) real city, and home of one of their favorite bands: The Replacements. And they played their hearts out – they sounded great and had a great time on stage….

Check out a brief video from the show. 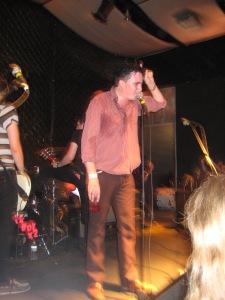 Yeah, we got pretty close.

After the show the band hung around and mingled with their fans – again, they were totally humble and genuinely nice and appreciative. Eddie talked to us for a good ten minutes – mostly about comic books, the slooooooow pace of the Midwest, and his girlfriend’s parents. As Jasper signed my Jasper shirt, I told him it was great to see a band giving 110% and having a great time on stage. His eyes widened and he said, “That was an AWESOME show!!”

The band's set list..."We didn't actually play that," Eddie said as he added his signature.

The Boogle
Create a free website or blog at WordPress.com.