Now available for pre-order for $9.99. Click here to order and be one of the first to receive a copy!!

This is the true story of Lance Ward’s journey in and out of high school and his fights against abusive and uncaring family members, school yard bullies, and his own sense of self-worth. With his family in poverty, Lance grew up on sardine sandwiches and cabbage soup. He wore $8 shoes and tolerated hostile classmates and the nickname Kmart Shoes. On some days, Ward battled drug addiction and felony charges, on others he just needed to find a place to sleep in his own home. A con man screwed up his life, Ward’s mother kicked him out, his father didn’t want him, and the military wouldn’t take him. Only one thing kept him going – he could draw. Now, years later, Lance looks back and tells us his story in raw, honest detail. An in-your-face story of struggle and survival that is heart-breaking, comical, sad and triumphant.

“There’s a fantastic rawness to both his storytelling and drawing…Ward had a resiliency to him that allowed him to fight back against his tormentors and carve out an identity for himself…a bold, unadorned, and powerful autobiographical voice.”

Lance Ward is a national editorial cartoonist for Crowded Comics.com and the author of KLONKO, One Day in 1978 and Stovetop (Creator’s Edge Press). His cartoons have appeared in The Pulse magazine, The Cedar magazine and City Pages. In 2011, he was featured artist for the “Just Add Ink” art show at Altered Esthetics Art Gallery.

1. Lance grew up with “Jim” as a father figure.

2. New Year’s Eve 1986 was a pivotal moment in Lance’s life. Obviously, he didn’t kill himself.

3. Lance was lucky to meet lots of very helpful people… 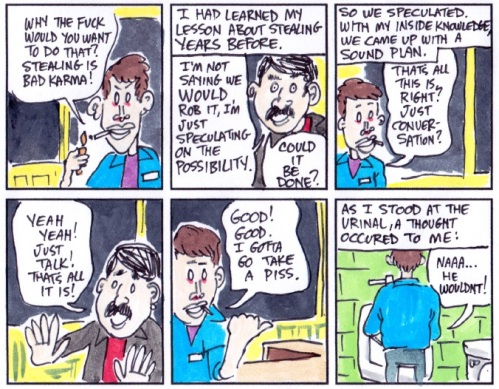